Did the Kawakawa Five get off light?

Who caught the TVNZ episode of Coastwatch where five fisherman were caught at Kawakawa with 110 Snapper and 1 Kahawhai, 55 over their limit. At first the Fisheries officers were about to tick off the catch, but then they lifted the carpet and opened the floorboards. More were found in the battery compartment. 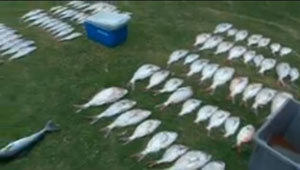 The fisherman admitted to concealing the fish in the boat, but this was not enough to having their boat taken from them. They would have had to catch 135 snapper for that to have happened, Instead they each got a fine. The dead fish were dumped at sea.